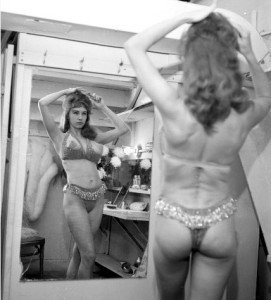 Two big, stupid and violent Pollacks from East Detroit. Though that was never said, mostly because of the big and violent part. Because they were bigger than any of us, and older. And because they took us to a decrepit titty bar in Detroit before we had even entered high school. I remember only patches of when I was 15. A screwed up family life, drifting pseudo-friends and the recent discovery of drugs to take all that shit out of sight, if only for a while.

But I remember the little titty bar in Detroit.

It wasn’t called that, of course. It was called a “Gentlemen’s Club” on the sign – a fritzy neon thing hanging on a brick storefront in a crappy neighborhood. That was the likely the most expensive part of the decor. And it slightly set the building apart from every other crappy storefront in that crappy neighborhood, most of them boarded up – a place set apart from the rest of Detroit because the criminals were mostly white rather than black.

The violent Pollacks were called the Bukowski brothers. Actually, they weren’t even called that. Their name is among the memory casualties of that period. I just remember it was a Polish name with a -ski suffix, and sounded brutish. Bukowski will have to do for now – I’m sure Charles would’t mind. They weren’t even brothers, but we thought of them that way. They were close. They were both big, liked to drink and liked to fight. And, in hindsight, only rarely got laid. That may have had something to do with the fighting. Maybe they fucked each other.. who knows? That stuff was way beyond me at 15.

Instead of getting laid, they connected with their “little brother” Martin, who had moved to the more upscale Birmingham after living near them on the East Side. They adopted the bunch of us, and served as an unfortunate choice of father figures for many of us. They were an inspiration in ways. They had one of the greatest jobs we could imagine. They were garbagemen.

It wasn’t something I ever thought of doing, but they were making a few hundred dollars a day riding on the back of a truck for a few hours each morning. They didn’t have to sit down and buckle seat belts like the rest of us, they rode like cowboys hanging off the back of the beast. The companies were run by the mob and paid for by the city, using taxpayer funds. So they were paid well. They worked hard, but they worked about 4 hours a day. They could drink until late night, go to work, and then be back in bed by 8 am. When you’re 15 and life sucks, that sounds pretty good.

So one night they decided we needed to be introduced to tits, as we hadn’t actually seen many. They drove us an hour across town to the Gentleman’s Club. The neighborhood was unsafe even for adults, and the bar was certainly unsafe. But we were 15, and accompanied by two huge bruisers with one eye out for trouble.

When we walked in, one of the strippers and the bartender eyed us, and then looked at the brothers with what seemed like exasperation, “Mike…what are you doing…?”

Mike Bukowski ignored the comment greeted them with eyes slightly narrowed to preclude any further protests. Perhaps not wanting their dump smashed up, they shrugged and led us to a row of seats by the bar. The place seated maybe 20 people max, and there were 2 other customers. The bartender looked like he was going to say more, but he instead averted his eyes and then walked off. Maybe he didn’t care, or maybe he didn’t want to risk a confrontation. Mike did like a good fight.

And sure enough, this fresh faced white kid from the richer suburbs soon had a beer in his hand and 2 pairs of tits just across the bar. I was officially grown up now.

The girls weren’t exactly like the girls in my father’s Penthouse magazine collections, so sloppily hidden in the top of his closet. They were a bit worn looking, one looked old enough to be my mother. The most attractive one, and I am speaking relatively, had the breasts of a boy. And I like small breasts. I was just disappointed that my first exposure to breasts involved breasts that looked pretty much like my own.

Still, my mind was spinning. What if I could get laid tonight? I mean, these girls obviously fucked a lot. Wouldn’t a fresh faced boy be a change? With all the dregs that must walk into that bar, surely I would stand out. I could go back to Birmingham, no longer a virgin, but a man of the world who had just bedded a Detroit stripper.

It didn’t work out like that. For reasons I couldn’t then comprehend, the girls just weren’t into junior high school kids. But they danced, and one chatted up Mike next to me. And we drank beer.

Apart from the large turd carefully placed on top of the toilet seat in the men’s room, rendering it unusable, I remember little else of the night.

Except that I was not yet 16, and I had already been to a titty bar.